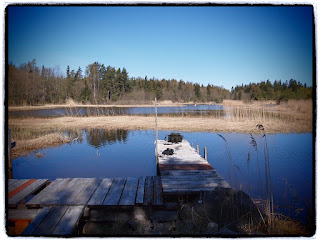 
testing my new 'd-series' hydrophone design (available from June 2012 from hydrophones.blogspot.com) against the DPA8011's.
The DPA's are no longer in production but did used to cost over £1000 each & if you want one now you'd be lucky to find them below £2000 each second hand.
So, my d-series will be priced around £60 each & though I say it myself i'm very pleased with the way they stacked up in comparison with the DPA's.
The DPA's have a stronger signal as they have a built in additional pre-amp, however the most interesting difference is the way the two hydrophone designs pick up all the same sounds but at different levels. The DPA's seem to focus on the higher end sounds & the d-series cover a wider range of sounds more equally. I know i'm biased but I much prefer the sound of the d-series, which to my ears capture a more diverse, richer & more complex sound world.
Another interesting fact is that the DPA's had hardly any low frequency response. I tried applying various low pass filters on the Sound Devices recorder to them & none made any difference to the sound. This was a surprise indeed & i'm somewhat puzzled by that.
Both recordings were made directly into the SD7 series recorder, with gain levels equal & in the same location: 2 hydrophones of each model either side of a small wooden pier on an inlet on the east coast of sweden in May 2012.
Of course, the d-series are my design so as I said earlier I am biased, but lets just say that i'm very pleased by the way they perform next to the high-end DPA's.
£2000 + for a DPA8011 (if you can find one)
or
£60 for a JrF d-series
hmmm....
Posted by Jez riley French at 10:23 PM

Do you think you could run a C pro vs D series comparision and maybe explain the differences between the models a little more?

I very recently purchased a couple of the C Pro series and am interested in what the D series may offer in comparison.

Hi,
yes - i'll be doing this soon. What I will say however is that, depending on the quality of the pre-amps / recorder used the difference between the c & d series units will be relatively small for most. One of the main reason for updating the higher spec hydrophone was that some folks liked the way the c-series suspended itself in water & others didn't. So, the d-series uses a smaller capsule, is slightly heavier & uses a new element using the ceramic welding technique.

basically I always work on updating & improving the units & so the d-series is to replace the c-series.